What Will My Period Be Like After I Have My Baby? 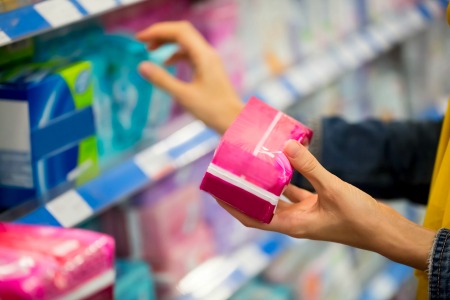 During pregnancy, your menstrual cycle goes on hiatus. When it resumes, it’s good to be prepared for some changes.

The biggest reward of pregnancy is going to be your adorable newborn baby. But if you’re like many moms-to-be, another huge bonus is that you no longer get your period. Wondering when will it return, and how will it be different?

Keep reading to learn more about your post-baby period!

When Will I Get My Period Again?

Whether or not you breastfeed will be the most significant factor affecting when you’ll get your period again. Prolactin, the hormone that produces breast milk, suppresses ovulation. If you don’t plan on breastfeeding, you can expect your period to return around 4 to 8 weeks after post-birth. For women who breast-and formula-feed, it could take anywhere from a few weeks to months for their period to return. If you’re breastfeeding exclusively, it’s normal not to menstruate for six months or longer. Many new moms have found that they don’t get their first period until after they stop breastfeeding.

Can I Get Pregnant Without It?

Just because you’re not having your period doesn’t mean there’s no risk of pregnancy. Some women find this out the hard way and are already pregnant again at their six-week postpartum visit!

Ovulation happens before menstruation. Once you ovulate, you’re fertile, so you could get pregnant even if you haven’t had a period yet. This is true for nursing moms too, so it’s not wise to rely on breastfeeding as a form of contraception.

Make sure to use another method of birth control. Ask your doctor about which form of birth control would work best for you because some aren’t recommended for nursing moms. For example, birth control pills that have estrogen might interfere with breast-milk production. So, the estrogen-free “mini-pill” may be a better choice.

Will My Periods Be the Same?

Every woman is different; your period may change a little, a lot, or stay the same. Your post-baby period could be longer or shorter, heavier or lighter, and even how long it lasts could be different.

You might also experience increased or decreased cramping since your uterus grows during pregnancy, then it shrinks after you deliver. Your endometrial lining (which sheds during a period) has to remodel itself as it goes through these changes. This process happens with each pregnancy, so you might notice changes in your period after each baby.

If you’d been on hormonal birth control before you got pregnant, your period might be heavier after childbirth. This is because of hormonal contraceptives thinning the endometrial lining. If you give birth via a vaginal delivery, a tampon might sit differently or feel different. But typically, most women don’t need to size up their tampons. As time passes, using a tampon should feel as natural as it did before.

How Will I Know if Something’s Wrong?

With your first post-baby period, you can expect some heavier bleeding and increased cramping. But alert your doctor if you need to change your tampon or pad every hour or more. It might be a sign of an infection, fibroids, or polyps.

“How Long Before My Baby Belly Goes Down?”

Question: “I had my baby a couple of weeks ago, and I’m so ready to get my pre-baby body back! How long before my baby belly goes down?”

Answer: The timeline to lose the baby weight is different for every woman and depends on a few factors. These include whether or not you’re breastfeeding, how much weight you gained during your pregnancy, your diet, and how much exercise you get.

Two weeks after delivery, try and avoid weighing yourself. If you’re breastfeeding, you’re probably still getting the hang of it. Plus, your hormone levels are just starting to come down, so you’re still in the “baby blues” phase when anything can make you cry. Don’t feel discouraged, because the number you see on the scale usually doesn’t indicate lots of body fat. About six weeks after you deliver, your uterus will return to its normal spot in your pelvis, making your belly look flatter and smaller. We recommend keeping the healthy eating habits you began when you were pregnant. Try and fit some exercise in when you can, too. Something as simple as taking your baby on a walk around the neighborhood will help you get fitter, faster.

At the end of the day, every woman is going to lose postpartum weight at her own pace!

5 Hacks to Get Your Pre-Baby Body Back After you’ve had a baby, it can be annoying and discouraging to discover that your body doesn’t bounce right back right away.

But don’t worry–experts say give yourself 9 months (the length of a pregnancy) to get back to your pre-baby figure. They also advise against crash dieting or a strict exercise program — especially if you’ve had a difficult pregnancy or a C-section delivery.

So, here are our 5 hacks to get your pre-baby body back as soon as possible:

Do you have any tips that we didn’t mention? Please share them with others by leaving a comment below!

No Comments
Categories : Post Pregnancy Health
Tags : Getting Rid Of The Baby Weight, Getting Your Pre-Baby Body Back, Post-Pregnancy Excerise